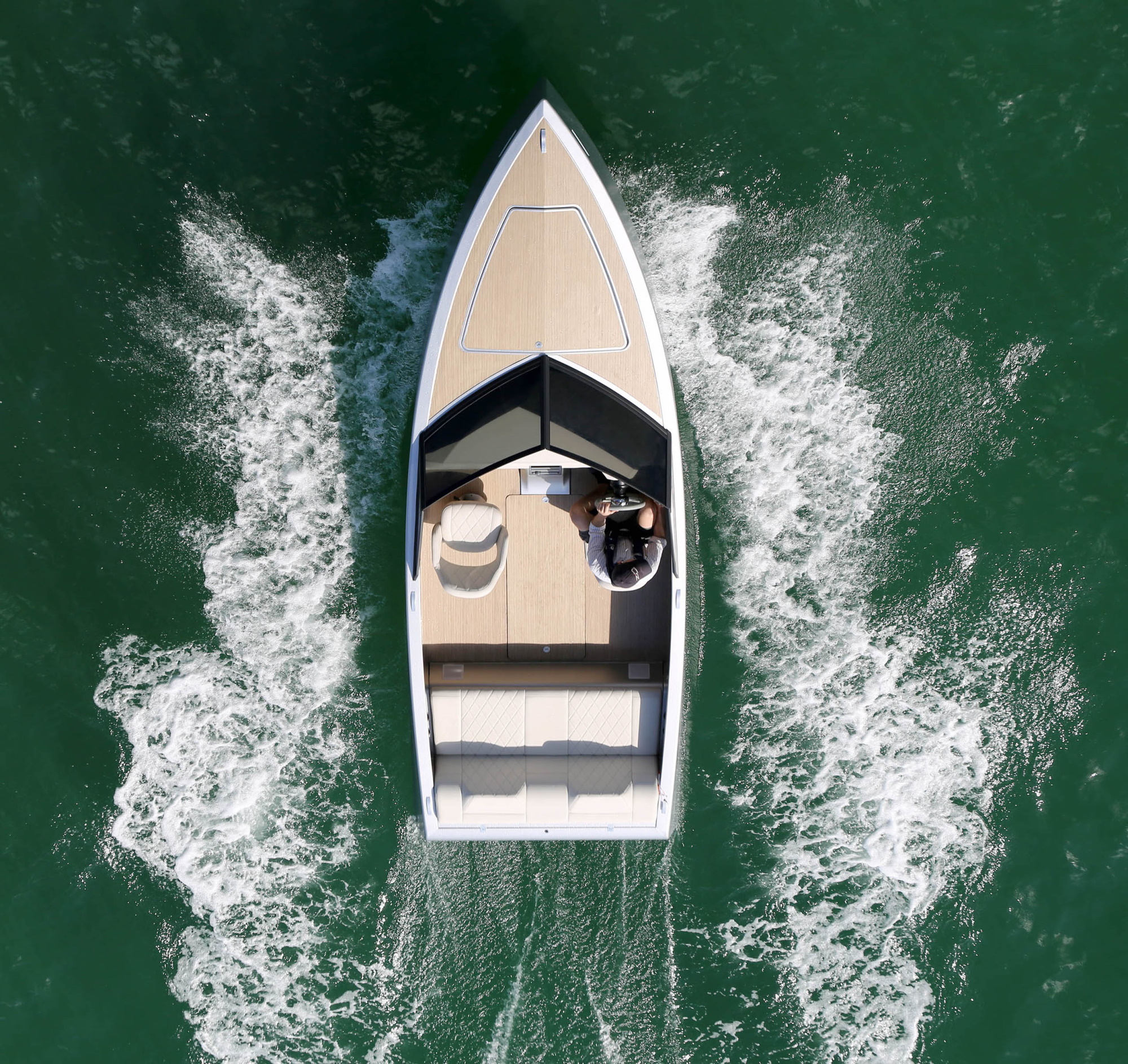 The automotive industry is knee deep in the vast transition to electric, but one place where gas is still going strong is out on the water. Seattle startup Zin Boats wants to start what you might call a sea change by showing, as Tesla did with cars, that an electric boat can be not just better for the planet, but better in almost every other way as well.

With a minimalist design like a silver bullet, built almost entirely from carbon fiber, the 20-foot Z2R is less than half the weight of comparable craft, letting it take off like a shot and handle easily, while also traveling a hundred miles on a charge — and you can fill the “tank” for about five bucks in an hour or so.

Waiting for the other shoe to drop? Well, it ain’t cheap. But then, few boats are.

Piotr Zin, the company’s namesake, has been designing racing sailboats for 20 years, while working in industrial design at BMW, GM and other major companies. Soon after settling down on a houseboat on Seattle’s Lake Union, he realized that the waterways he had enjoyed his whole life might not exist for the next generation.

(Disclosure: Zin actually moved in next door to my mother, and I happened to find out he was working on this while visiting her.)

“The reason I started working on electric boats specifically is because I had a kid, and I had a come to Jesus moment,” he told me. “I realized: If we’re not going to do something personally about the quality of the water we live in, it’s not going to be here when my kid is my age.”

Traditional gas-powered boats are very much a product of the distant past, like running a ’70s-era car half underwater. Surprisingly, electric boats are equally old. Like electric cars, they enjoyed a brief vogue in the early 20th century. And likewise they were never considered viable for “real” boating until quite recently.

Like most things, it comes down to physics: “The power required to move a boat, versus the power to move a car, is absolutely enormous,” Zin explained. “It’s like driving a car in first gear at full throttle all the time.”

That level of draw limited electric boats to being the aquatic equivalent of golf carts — in fact, carts and some of the more popular old-school electric boats share many components. If you’ve ridden in one, it was probably a Duffy, which has made models for puttering around lakes at 3-4 knots since the ’60s. Perfectly pleasant, but not exactly thrilling.

“We tested this boat to 55, but decided not to sell that to people. It’s just insane.”

What changed everything was the increasing density and falling cost of lithium-ion batteries. The Z2R uses BMW batteries mated to a custom Torqeedo engine, and at cruising speeds (say 15 knots) can go a hundred miles or more. It recharges using anything from an ordinary wall plug to the high-amperage charging cables found at most marinas, in which case it will put another 50 miles in the tank while you eat a sandwich.

Considering traditional boats’ fuel efficiency and the rising price of marine gas, going electric might save a boat owner thousands every year. (Maintenance is also practically non-existent; Zin advised hosing it down once in a while.)

But it’s also more than capable of going extremely fast.

“The top speed is way over 30 knots,” Zin noted. “We tested this boat to 55, but decided not to sell that to people. It’s just insane.”

Having ridden in it myself, I can confirm that the Z2R really jumps off the line in a level-bottomed way that, compounded by its near silence, seems impossible. Just as Tesla’s consumer sedans compete with Lamborghinis in 0-60 times, the instantaneous response is almost frightening.

“The boat was designed around the battery. The unique part of using an electric system is we can put the motor anywhere we want,” Zin said. By sitting it flat on the bottom, the center of gravity is lowered and weight distribution evened out compared to most speedboats. “You look at a lot of traditional boats’ builds, they kind of cram everything in the back. Then when you put the hammer down, you can’t see anything for five seconds. In this boat, there’s no bow rise — it sits flat.”

Being so level means there’s almost no risk of overturning it, or many of the other failure modes resulting from lopsided designs that misbehave at speed. Simplicity of operation and surprising performance seem to be a family characteristic of electric vehicles.

“Most builders aren’t about innovation, they’re about ‘this is how we do it.’ “

Zin is proud to have designed the boat himself from scratch, using both high-performance fluid dynamics software and scale models to work out the shape of the hull.

“Boat building is a very traditional business. Most builders aren’t about innovation, they’re about ‘this is how we do it.’ ” Zin said. “But there’s a huge advantage in being able to use these tools. The computing power that we have in video cards just in the last few years, mainly because of the gaming industry, has pushed what’s possible further and further.”

Previously, large computational fluid dynamics suites would have users submit their parameters and pick a few milestone speeds at X thousand dollars per data point — 10 knots, 20 knots, etc. The way the water would react to the boat and vice versa would be calculated at those speeds and extrapolated for speeds in between. But with increases in computing power, that’s no longer necessary, as Zin ended up proving to a commercial CFD software provider when he used a separate compute stack to calculate the water’s behavior continuously at all speeds and in high definition.

“Right now you can run the boat [in the simulation] at any speed you want and see the way the water will spray, including little droplets. And then you can tweak the shape of your hull to make sure those droplets don’t hit the passengers,” he said. “It’s not exactly the way most boat designers would do it. So utilizing high-end software that was not really being given its full potential was amazing.”

Building practically everything out of carbon fiber (an ordeal of its own) puts the whole boat at around 1,750 pounds — normally a 20-foot boat would be twice that or more. That’s crucial for making sure the boat can go long distances; range anxiety is if anything a bigger problem on the water than on the road. And of course it means it’s quick and easy to control. 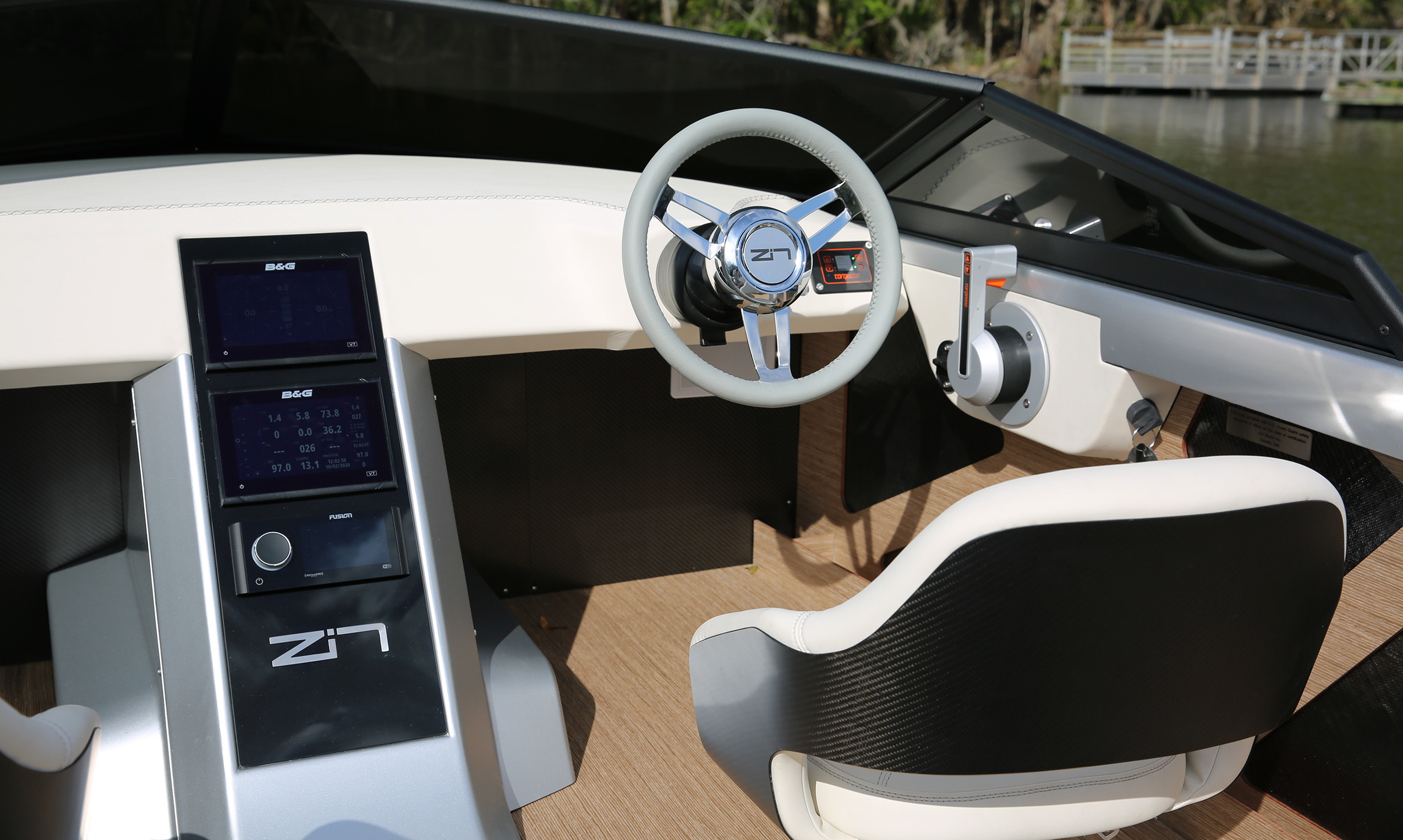 Yet the boat hardly screams speed. The large open cockpit is flat and spacious, with only a steering wheel, throttle and screens with friendly readouts for range, media controls GPS and so on. There’s no vibration or engine roar. No aesthetic choices like stripes or lines suggest its explosive performance. The wood veneer (to save weight — and it’s tuned to the speakers to provide better sound) floor and cream leather upholstery make it feel more like a floating Mercedes.

That’s not an accident. Zin’s first customers are the type of people who can afford a boat that costs $250,000 or so. He compared it to Tesla’s Roadster: A showy vehicle aimed at the high end that will fund and prove out the demand for a more practical one — an open-bow tender model Zin is already designing that will cost more like $175,000.

Conscience with a wallet

The target consumer is one who has money and an eco-conscious outlook — either of their own or by necessity.

“There are a lot of inquiries from Europe, where the environmental restrictions are stricter than in North America. But we also have a number of pristine lakes that are electric-only for the purpose of keeping them clean,” Zin explained. “So if you live on a lake in Montana that’s electric-only, you have the option to go at five knots, and you can’t even cross the lake because the boat is so slow… or you can have a fully functional powerboat that you can water ski behind, the same speeds you get in a gas power boat, but it’s absolutely emissions free. I mean, this boat is as clean as it gets — there’s zero oil, zero gasoline, zero anything that will get into the water.”

It really made me wonder why the whole industry didn’t go electric years ago. And in fact there are a few competitors, but they tend to be even more niche or piecemeal jobs, mating an electric engine to an existing hull and saying it’s an electric boat that goes 50 knots. And it does — for five or 10 minutes. Or there are custom boat builders who will create something quite nice for a Zin-type customer — head on over to Monte Carlo and buy one at auction for a couple million bucks. 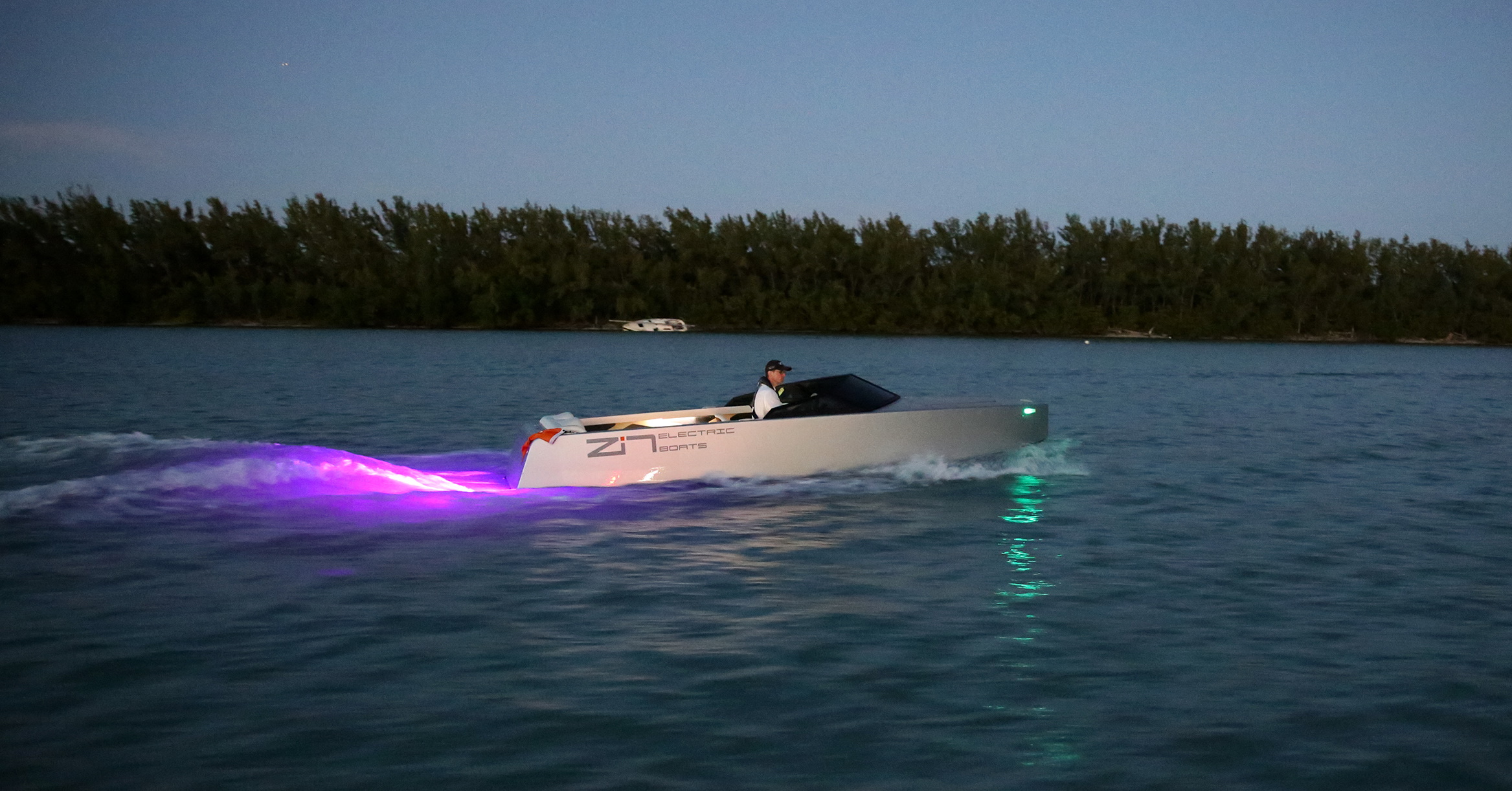 Zin sees his boat as the first one to check every box and a few that weren’t there before. As fast as a powerboat but nearly silent; same range but a fraction of the price to get there; handles like a dream but requires practically no maintenance. It’s as smart as the smartest car, limiting its speed based on the waterway, automatically adjusting itself to stay within range of a safe harbor or charger, over-the-air updates to the software anywhere in the world. I didn’t even get a chance to ask about its self-driving capabilities.

As a first-time founder, a technical one at that, of a hardware company, Zin has his work cut out for him. He’s raised seed money to get the prototype and production model ready, but needs capital to start filling his existing orders faster. Like many other startups, he was just gearing up to go all out when the pandemic struck, shutting down production completely. But they’re just about ready to start manufacturing again. 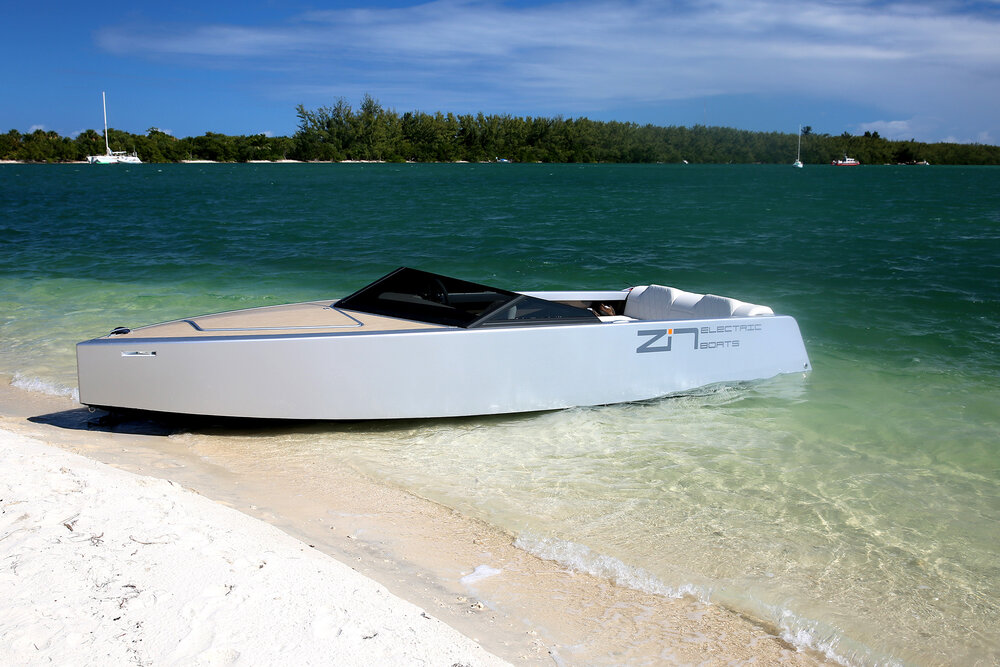 “I realized that there isn’t such a thing as a boat company any more,” said Zin. “Part of what we do is to build that shell that holds everything, and it happens to be moving through the water, which makes it a boat, but that’s really where the boating part of it ends. It’s really a technology hub, and my company is not just a boat company, it has to be a technology company.”

He said that his investors understand that this isn’t a one-off toy but the beginnings of an incredibly valuable IP that — well, with Tesla’s success, the pitch writes itself.